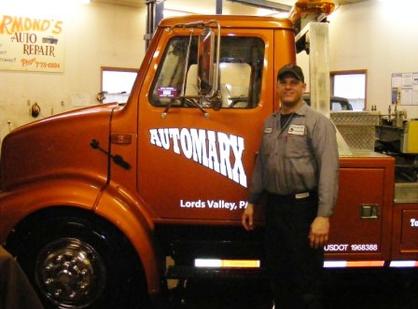 Years later, the collaborative team felt the need to expand once again.  With the poor winters, consisting of bad snow storms, and icy roads, more and more vehicles became stranded, skidded off the road or sadly ended in accidents.  Concerned with this, both Mark and his Father bought a tow truck and included a tow service to their Auto Repair Shop.

As time increased, so did Armond’s Auto Repair.  In the late 90’s, they expanded more by adding a 40’x40’ addition which gave them more room to work.  With the expansion, they became more functional and fully efficient.

In 2005, an ambitious Mark, bought the partnership and renamed Armond’s Auto Repair to the now Automarx.

Family owned and customer friendly, Automarx offers great service with a smile.  They work diligently to have you up and running and you can guarantee it will be done right.  Like their motto claims, “Your Ride Is Our Pride” and you can believe they mean every word

From very young, Mark Prisco had a fascination for cars and trucks.  He admired the way they looked, felt on the road and what made them work.  His father, Armond Prisco, a highly skilled mechanic, owned and operated their family auto repair shop, and naturally became the ideal mentor to teach young Mark about what was under the hood.

The family shop wasn’t that big but was efficiently equipped with two bays and the necessary tools needed to run their small business.  Young Mark, following in his father’s footsteps , became highly proficient in auto parts, repair and customer service and in 1987, joined partnership with the senior Prisco.

Together they grew the business and within four years were afforded the opportunity to add on an additional bay, a parts room and an engine room.  With the new appendage, they were able to offer more services to the community, therefore elevating their reputation and know how.